In the lead-up to Christmas, the liturgy reminds us repeatedly of the important role of St John the Baptist, the precursor of Jesus in preparing the people to receive him. In this meditation we consider: 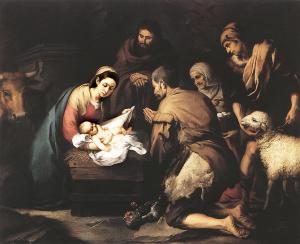 The birth of Christ is a special time in the Church’s calendar. It is a joyful event that marks the beginning of our salvation.

From the manger in Bethlehem Jesus teaches us many lessons. In this meditation we consider the lesson of detachment from material things and comforts, which abound especially at Christmas but throughout the year as well. We consider that:

The birth of Christ in the stable of Bethlehem has much to teach us. In this meditation we consider seven lessons Christ teaches us from the manger:

We have all read many times that Our Lord was wrapped in swaddling cloths and laid in a manger, and we may have wondered exactly what these are. I post here an answer to some questions on the birth of Christ, which contains a number of very interesting observations from Pope Benedict.

I take advantage of the occasion to wish you and your loved ones a very happy and holy Christmas and a New Year filled with God’s blessings.

I have three questions on the birth of Christ. Why do we say he was born in a stable when the Bible doesn’t make any mention of this? What are swaddling clothes? And what exactly was the sign announced by the angel of a child wrapped in swaddling clothes lying in a manger?

The birth of Christ has a number of extraordinary aspects and your questions touch on some of these. The first is that the Son of God, the King of Kings, was born in such humble surroundings. Surely God in the flesh should have been born in a palace, a castle, or at least a dignified inn. And he should have been laid in a bed or a cot, not in a manger, a feeding trough for animals.

But God’s ways are not man’s ways, and God clearly wanted it to be that way in order to teach us something. From the humble circumstances of Christ’s birth we learn, in the words of the Catechism of the Catholic Church, that “To become a child in relation to God is the condition for entering the kingdom. For this, we must humble ourselves and become little” (CCC 526).

And from the poverty of the stable we learn that the possession of material wealth, with all its attending comforts, is not as important as the possession of God. Mary and Joseph, while poor in the material sense, were truly rich in having the very Son of God, the King of Kings, in their family.

Returning to your questions, why does Christian tradition, and even the Catechism, say that “Jesus was born in a humble stable” (CCC 525) when nowhere in the Scriptures do we find any explicit mention of it? Indeed, St Matthew limits himself to saying that “Jesus was born in Bethlehem of Judea” and, significantly, when he tells of the arrival of the magi he says that “going into the house they saw the child with Mary his mother” (Mt 2:1, 10). The reference to a house can be explained by the possibility that after the birth in a stable, Mary and Joseph were finally able to find a house in which they lived at least until the presentation of Jesus in the Temple of Jerusalem forty days after his birth. St Luke doesn’t mention a stable either but he does say that after Jesus’ birth Mary wrapped him in swaddling cloths “and laid him in a manger, because there was no place for them in the inn” (Lk 2:7). Since a manger is a feeding trough for animals it has always been assumed that Jesus was born in some sort of stable.

Pope Benedict XVI, in his book Jesus of Nazareth – The Infancy Narratives, comments on the significance of the manger: “The manger is the place where animals find their food. But now, lying in the manger, is he who called himself the true bread come down from heaven, the true nourishment that we need in order to be fully ourselves. This is the food that gives us true life, eternal life. Thus the manger becomes a reference to the table of God, to which we are invited so as to receive the bread of God” (p. 68). We might add that the name Bethlehem means precisely “house of bread”.

But why do we associate the birth of Christ with the actual presence of animals, in particular an ox and an ass? Pope Benedict XVI, acknowledging that the Gospel makes no mention of animals, writes: “But prayerful reflection, reading Old and New Testaments in the light of one another, filled this lacuna at a very early stage by pointing to Is 1:3: ‘The ox knows its owner, and the ass its master’s crib; but Israel does not know, my people does not understand” (ibid., p. 69).

And what are swaddling cloths? In ancient times, as often seen in icons of the nativity scene, the newborn child was customarily wrapped round and round with a narrow band of cloth like a mummy. It was thought this would help the limbs to grow straight. Pope Benedict comments: “The child stiffly wrapped in bandages is seen as prefiguring the hour of his death: from the outset, he is the sacrificial victim… The manger, then, was seen as a kind of altar” (ibid., p. 68). The swaddling cloths can be seen too as a reference to Christ’s kingship and his descent from King Solomon, the son of King David. Solomon, in the book of Wisdom, writes: “I was nursed with care in swaddling cloths. For no king has had a different beginning of existence; there is for all mankind one entrance into life, and a common departure” (Wis 7:4-6).

So there is much symbolism and much to be learned from these simple aspects of Christ’s birth in Bethlehem.

Another meditation, this time on detachment, an important virtue in a consumer, pleasure-seeking  society. To listen to it, please click on the link below.